A little while ago I saw this sad little bench sitting on my sister's deck.
﻿

Apparently my BIL inherited it from the previous home owner. He didn't want to throw it away but didn't know what to do with it so it just lived in a corner on the deck.

Ever since I started this blog I see everything as a DIY opportunity!
This old thing was in pretty rough shape. The old paint readily flaked off in some areas but in other areas...I had deck stripping flashbacks... *shudder*
I spent about 3 hours sanding off the old paint. No, I do not have an electric sander or paint stripper....
The bench was also a little wobbly so I replaced some of the screws and also filled in some cracks and dents with wood filler.
I was going to get my usual Painter's Touch spray paint in Winter Grey but I was at Canadian Tire and they don't carry that brand so I went with the only glossy grey they had: 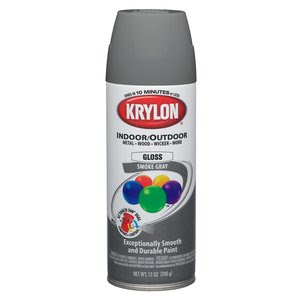 Krylon's Smoke Gray spray paint. I was a little apprehensive because we all know my last experience with Krylon spray paint...but decided to give it a shot.

I quickly noticed that the spray paint wasn't really showing up against the wood.
So I whipped out whatever was left of my white metal clad paint and gave the bench a coat of paint which resulted in this:
I had inadvertently white washed the bench! I always wanted to try white washing. I love the look. It's beautiful!
I was tempted to just leave it as is but I don't think this style suits my sister and BIL.
So I slapped on another thicker coat of paint to give me a smoother surface to work with and then gave it a couple coats of the smoke grey spray paint.
When it came to the pattern, I really wanted a trellis pattern similar to this: 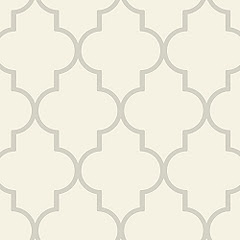 But I can't afford to buy a stencil and doing it by hand is just out of the question although I know some talented DIYers out there are more than capable of doing it!
So I went with a simple pattern.

SO then I had to reverse my painting sequence.

I repainted the top of the bench white- this time in a latex paint for a faster drying time.
I let that dry for 24 hours just to make sure it was completely dry. Then I took 1" painter's tape and taped 3 X's on the bench making sure the tape was taut and firmly in place:
﻿
Then I painted a thin layer of white paint over the tape and let it dry:
This will seal off the edges to prevent any grey paint from seeping under the tape- allowing you to have perfect lines. This is a brilliant painting tip that's all over blog world. Whoever discovered it is a genius!

While the paint was drying I went to Home Depot for my trusty Painter's Touch spray paint in Winter Gray. Why do I stray from what I know is good and right?! I supposed it's good to always try new things right?
Yes it is. And sometimes you just don't have a choice. Winter Gray was out of stock!
So I went with Tremclad- my first time using this...

And this time I went with a flat finish. I wasn't loving the glossy sheen the Krylon paint gave. It make it look too silvery- almost metallic-like but in a cheap way. That probably doesn't make a lot of sense. I had a picture of it to show you but it got lost when my hard drive died. In any case, I didn't like it.
This gray is pretty dark (Painter's Touch Winter Gray is A LOT lighter). Other than the limited colour selection, I LOVE this brand of spray paint! It is so pigmented. What took Krylon 2-3 coats, this did in 1. Pretty awesome.
Want to see how great that paint trick worked on the stripes?
How awesome is that?!
For those you thinking the extra step is not worth it, look at what happens when you don't do the paint trick:
I had to touch up a small area and foolishly thought I could get away with not doing the paint trick. BAD IDEA.

So once I took the time to fix everything properly, I looked at the bench and went "hm...". I wasn't sold on the overall look.
Don't you hate it when your vision looks a lot better in your head than in reality?
I'm not sure what's wrong with it. It might be the high contrast between the white and gray, it might be that I should have gone with 1/2" lines instead of 1", or 4 segments, instead of 3. Regardless, something had to be done.
To try to remedy this, I painted the edges white:
A little better, no?
Yes but the white paint seeped through! I guess I didn't spray a thick enough layer of gray paint to seal the edges. Argh. At this point, I wanted to ditch this project. What I thought was going to be a quick makeover was starting to annoy me.

Let the retouching begin! And finally:
﻿

I can envision them using this as a time out bench. "Sit on the X for 2 minutes and don't move!"
﻿

Again the before and after:
When my sister came over for dinner, she didn't even recognize it! That's a good sign!
Posted by Nancy @ Life: Designed at 08:43