Give An Old Shelf New Life!

Now that my sister and brother in law are moving their bedroom upstairs, they need smaller bedside tables or wall shelves that act as bedside tables.

Something like this wall mounted shelf would be great!
But not $179 great...
I spent a day thinking about making them something like that but I wasn't confident it the stability of it once mounted on the wall. The CB2 shelves comes with mounting cleats- I wasn't quite sure how to replicate the cleat on a budget.

In the meantime, my brother-in-law found these narrow tables at Ikea that was the perfect size:
At $90 they much better than the CB2 wall shelves but still...not quite worth it. Especially since in a few months they will be moving and will (hopefully) buy new bedroom furniture!

Luckily they had 2 of these little shelves lying around that I could modify! So thus beings the loooong story of how this:
﻿

Became this:
I was a little early meeting a friend for lunch so I popped into a Dulux Paint store. I had never been in there before and they were having a sale so I decided to see what they had in terms of lacquer paint.
After discussing my plans with the sales rep, she recommended their Metalclad paint @ $25 a quart (their lacquer paint was $68 for a gallon!) I have mixed feelings about this paint. I'll post a review of it later this week. All I'll say for now is it took days and days to paint the two shelves. With regular interior latex paint, this project would have been done in 1 day, 2 days max.

While they were drying, I built the drawers. Instead of buying drawer glides, I had the brilliant idea to use wood trim at just 85 cents a foot.

Here's all the parts I got for just one drawer:
And all that became this:﻿
The idea was that the trim would be attached to the inside of the shelf and fit inbetween the gaps of the drawer sides. It sounded good in theory but after all this work was done, I put the drawer in place only to find it not closing smoothly. Sometimes it would be ok, other times, it got stuck and wouldn't open or close easily. I sanded down edges thinking that would help but nope. It was just not a good idea to try to save a few bucks. I should have just bought glides...

I ended up dismantling the top part of the shelf which made it a lot easier to open/close the drawer. It makes the drawer a bit shallow, only about 3 1/2" deep but that's ok. It's just a night table afterall.
Back in June, I was volunteering at Habitat For Humanity Restore and I came across really cute drawer pulls that looked like little tree branches. I ended up not getting them because I really had no need for them.  But when it came time to think about hardware for these night tables, I thought of the branch pulls and thought they would be a great fit.

Unfortunately when I went back, all but one little pull was gone. Even though it wouldn't do for this project, I just had to get it.﻿﻿
﻿
I ended up getting these 5 pulls for $5 which is an awesome deal!

For the second drawer I cut the trim fairly small. There's no reason for it to be so long. I think the longer it is, the easier the drawer gets stuck and doesn't want to slide in and out smoothly.
At first I thought the trim on the sides wasn't necessary but it does 2 things:

1) It acts as a drawer stopper- preventing the drawer from falling out when you pull it open.
2) Since the shelf has no back, it prevents the drawer from going too far in. I positioned the trims so that the drawer front would be flush with the shelf:
﻿
﻿
﻿
One good thing about the metalclad paint is that it did deliver on the high gloss finish!

I think these will look great in their newly painted grey room. Next step is to convince them to paint their bed white! (or buy a new bed) =) 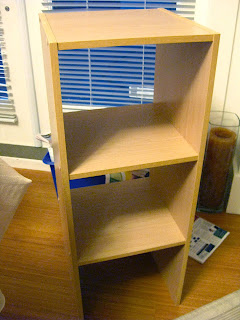 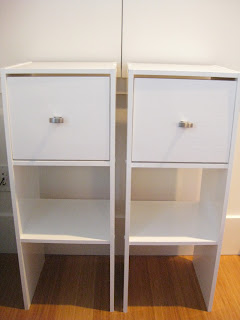 In total this transformation cost about $35 for both shelves. Not bad considering the paint alone was $25. It's definitely a step up from the horrible worn out blonde laminate!

The open shelf is perfect for a little book vignette or basket!
Posted by Nancy @ Life: Designed at 08:11