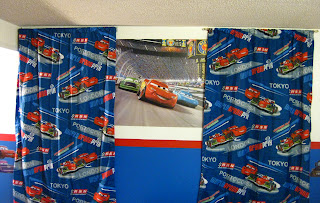 I shared earlier this week that my sister lives in an old home that's in "rough shape". If you didn't believe me, well take a look at this:

This is the basement AKA bedroom where all 5 of them slept in up until a few nights ago.
And yes those are OSB walls and unpainted GWB. Like I had said, they thought their stay here would be temporary.

So when my sister and brother-in-law finally decided to make the upstairs play room their bedroom, the boys got this basement to themselves - for play and sleep.

We are hoping and praying that in March, the permits will be done and construction will begin but until then, we wanted to make this space somewhat decent.

OSB is a pain to paint and even when painted, it just doesn't look good. So they bought economical plain white wallpaper from Home Depot and my brother in law and I had a blast (not!) hanging it over the OSB.

In my opinion, it's totally worth it to hire wallpaper installers!

We were going for a Cars theme so I painted the bottom 3 feet in CIL's Azure Blue with a 2" strip of CIL's Crimson Red on top.

A couple people mentioned it reminded them of a hockey rink. That's just fine with me since the boys love their hockey!

Now what to do with these awful brown closet doors....and this is the view upon entry. (There's another set of doors off to the right). There's a little bit of storage behind these doors, but it hardly gets used.

I initially wanted to get black and white checkered fabric to make drapes- you know, like the final lap checkered flag, but my sister found Cars themed drapes on clearance so we went with that. She also picked up a huge Cars vinyl sticker which fit perfectly between the new (and wrinkled) drapes!

Great for a temporary quick fix!

Now the boys finally have their own room!
Posted by Nancy @ Life: Designed at 08:08