I can't believe my niece is already turning 1 in a couple weeks!

This is a pretty big milestone in almost every culture and it's certainly a big deal in the Korean culture where we have certain traditions attached to this big day which we call "dol" or "doljanchi".

If you google Korean dol/doljanchi, you'll see people go all out with decorations for this day. A typical modern day decor piece is the dol go im (dol tower):
Neither me or my sisters have these towers in our dol pictures. So I asked my dad about it and he said traditionally they are only used for 60th/70th birthdays (which are big traditions in Korea - equivalent to the big 50 in North America). They represent lifetime achievements so of course it makes sense to have these for seniors birthdays.

Somewhere along the line, people started using them for dol celebrations. Maybe a new tradition will be that these towers represent achievements the little one will have in their life!

As I was researching where to buy these, I came across a bunch of sites on how to make these. Hurray for DIY!

First up, you need a cylinder base. You can use concrete forms/building forms which are just cardboard cylinders. Home Depot has 8' tubes that you can cut to size. I think in the States you can get 4' ones.

Other people use paper towel rolls. Genius! Since they no longer carry the 4' forms at my local Home Depot, I went this route.﻿﻿
It's a good idea to wrap the rolls in white paper to cover the ugly packaging.
I went to the bulk section at Superstore and got Lima Beans, White Beans and Black beans.

I had no idea how much I needed and turns out I bought too many black and white beans and not enough Lima Beans.

Here's what I suggest in order to get it right!
For two towers: 11" high with a 6" diameter you'll need:

Then I printed out a black border and Mia's Korean name to go on one tower (the other one translates to "congratulations on your dol").
Ok, now the gluing beings. At this point, I suggest you pop in 2, maybe even 3 good movies because this is going to take a while. 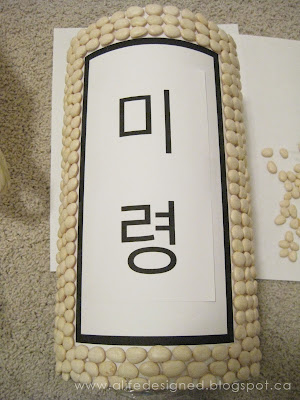 I started with the large beans (the lima beans). Hot glue is the fastest and easiest way to do this-  be careful not to burn yourself! 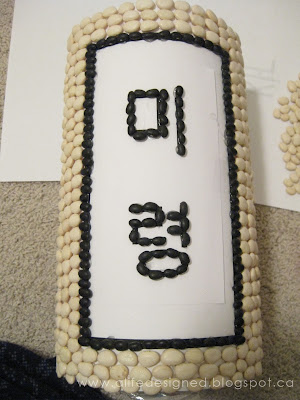 Then the black beans went on top of the border and the name.
You can use the same lima beans for inside the border, but I opted for smaller white beans to give it a different texture. This turned out to be the best option since I needed the small beans to get in between all the small areas.
The top gets a bit tricky. As you can see there are gaps with too much white paper showing through.
So I used the small white beans to fill in the gaps which fit perfectly.


And since I was running out of lima beans and had an abundance of black beans, I filled in the top center with black beans.

If you look closely you'll see it's far from perfect but from afar and in pictures, it looks alright!
Total cost: $13.80 for 2 towers.

And the best part- my nephew will have his dol in November so we can re-use the "chook dol" tower and I'll just have to make one new one with his Korean name on it. ﻿