I've wanted an iPhone for YEARS. And for years, I patiently waited for the right time to get one. A few months ago, it was finally time.

It's probably one of the best things that's ever happened to me. Haha!

After I got the phone, I struggled with what sort of case to get. Yes, it's a horribly difficult decision, isn't it?

For a while I thought maybe I would just make do without a case.
I love the look and feel of a naked iPhone.
However, the thought of something happening to it and having to pay an arm and leg to replace it was enough to get me iPhone case hunting.

There were a few that I liked and even came close to buying but none of them were "it".

Then earlier in the summer, I came across iErnest:
﻿

What's iErnest? Oh, you know...just the most fabulous iPhone case ever!

iErnest is a small company from the Netherlands that makes the coolest iPhone case (as well as iPad cases and a really cool camera strap).

What attracted me to it was the sleek leather case and Moleskine-like look.

What's Moleskine? Oh, you know...just the most fabulous notebook ever!
﻿Now, I LOVE Moleskine notebooks. When I worked in retail, these were the hottest item we carried. We couldn't stock them fast enough!

For those of you unfamiliar with Moleskine- it's hailed as the legendary notebook used by Picasso, Van Gogh, Hemingway, Chatwin and other noteable artists and writers.
When we first started carrying these notebooks, I was curious what the hype was all about -surely it had more to do than just name dropping, so I bought one. And...I gotta say, it's more than just hype.

These books really are awesome. Great look/design and the pages themselves are great to write on. The off white colour is a step up in sophistication in contrast to stark white paper and it just feels nice to write on.

It's hard to explain what's so great about this book- you have to just experience it for yourself. If you're an avid writer/doodler, you need this book! (And no, Moleskine is not paying me to say that).

Anyways, back to iErnest (I'm not being paid by them either).

Like I said, at first the Moleskine look caught my eye. Then I read "genuine leather" and I was even more in love.
Then I saw that you can get it in vertical format. Done deal! I needed to get this case.
I just love everything about it.
The phone snaps right into the case which is lined in velvet-like fabric so it doesn't scratch the phone when you snap it in and take it out. But there really is no need to take it out once it's in.
You can do everything you need to, including charging, without having to pop it out of the case.

The only thing the vertical version doesn't have compared to the wallet style, is a card slot which is not a big deal for me because I never leave my house without my wallet. But I can see how it could be handy for some people.
It took me a while to decide on a colour but I finally went with my first instinct-cognac. I love this shade of leather for shoes, bags, belts, everything!

So at this point, I was SOoooo excited to get this case only to be dismayed when I saw that they were all sold out! Every colour in both styles- sold out! They had a note on their website saying that they expected to have more mid August. So I waited....and waited...

Then, finally! They were back in stock and you better believe it, I was quick to order one. In total (with shipping), I paid about $50 Canadian. Not bad at all for an AWESOME leather case if you ask me!

It arrived super fast too. I ordered it on the 23rd of August and it arrived on my doorstop on the 30th. What a pleasant surprise!

They also carry iPad covers and cool camera straps:
It also has a strap for ease of carrying around:
Oh so European, no? LOVE it.﻿﻿
I could not be happier with my new iPhone case. Sigh... I just love the smell of leather don't you?!

Oh and just to compare a few days after I ordered my case, I saw these cases online on sale for $50 (originally $150!!), made in China and not even real leather: 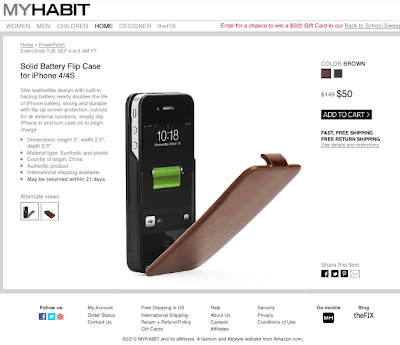 Just to reiterate, iErnest is handmade in the Netherlands and is genuine leather. And I love that it's a small company. Hurray for the little guys!
Posted by Nancy @ Life: Designed at 08:18