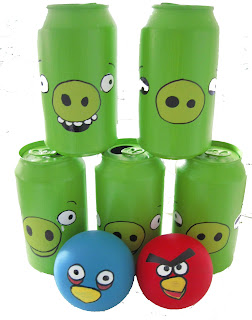 My oldest nephew, Matthew is turning 5 at the end of March! Wow...I still remember seeing him for the first time in hospital; the first time I held him; watching him sleep and putting my finger under his nose every few minutes just to make sure he was still breathing. Gosh I miss those infant days...

I even miss the times he would cry like the world was ending when I babysat. The only thing that would soothe him was to fill the bathroom sink with water and let him splash his feet around.

Oh my goodness... my eyes are tearing up just writing this! Why do kids have to grow up so fast?

On the day of his brother's 2nd birthday party where I decorated it with a safari theme (in honour of his love for The Lion King), Matthew pulled me aside and said, "For my birthday can we have an ocean theme?? We can paint the walls and make it like an ocean!"

Honestly, the first thing that went through my mind was, "Oh man.. his birthday is during one of the busiest times of the semester" So I said, "I'll do my best but you know, Eemo (that means auntie in Korean) is going to be really busy during that time."

"That's okay. You don't have to paint the walls." Ha ha. How gracious!

Over the past few weeks, he keeps adding to his list of party "wants". So... we're having an ocean theme, with a "pin the arm on the Kung Fu Panda" (his idea), a transformers cake which the talented and wonderful May from Charmed by Sweets is making. So it's not really an "ocean theme"- it's more of a Matthew's-favourite-things theme. Which is what it should be as it is his birthday!

I've now added to that mish mash of favourite things and made an Angry Birds game. (Dian- it's gonna be a surprise so don't tell Matthew!)

There are different ways to make these but since I have an abundance of cans at home (I've been too lazy to go to the bottle depot), I used gingerale cans. Perfect because they're green! I figured it would give me a good base.

I used Craft Smart paint in citrus green with a little bit of citron for the snout.

The paint is kind of thin and after one coat, I realized this was going to be very LONG process...

So I gave the cans a good coat of white spray paint as an even base to cover up all the text/graphics on the can. I'm not sure if that actually helped or not... Regardless, this was after about 4 or 5 coats:

The colour is PERFECT!

Then I painted the pig faces using a black marker and some white out.... Yes.. white out...

Which after a few coats of paint, turned into this:

Haha! Ok so the blue one didn't turn out so great.... but I love the red one! He looks ready to knock out some green pigs!

Right now it looks like a bowling game but on the day of the party, I'm going to set these up in the front yard along with a mix of plain and painted cardboard boxes which will look like wood and concrete.

This should keep him and his friends busy for a few hours!! Heck, I wanna play! I love Angry Birds!

Next up on the party to do list....Make "pin the arm on Kung Fu Panda". Actually, I think I'll tweak it to "pin the dumpling in Kung Fu Panda's mouth"!

Kiddie parties are so fun! =)